The U14 Boys Soccer team finished the regular season with a record of 1 win and 4 losses. Despite the fact that the boys did not make the playoffs, they have plenty to look forward to in the coming season. Both the midfield and the offense proved game after game that it had little trouble scoring – in fact, it scored 8 goals against the York School in the last game alone. The goaltending too is promising, for Dustin Silverburg’s skills kept the scores close for several games. But where the team will no doubt improve next year is with its ‘young’ defense, as it uses this year’s valuable experience and takes it into next season. This team should be a real contender next year! 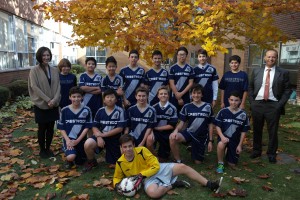