Tuesday the Under 14 badminton team traveled to Bayview Glen to play the last matches before the championship. Thank you to all the members of the squad and in particular congratulations to our girls double team Amy McCullough and Courtney Mayberry who won their match after a nail biting and gripping final game. All the members of the U14 team will be playing in the championship on May 22nd at St Andrew’s College.  Wish them luck!

Crestwood Hosted Bayview Glen’s Badminton team in a match Wednesday night. A skeleton Senior team had a successful outing with improvements all around. The girl’s doubles team of Victoria Sun and Selina Zhao won their first match in 2 hard fought games.  On the boys side, Jason Fu and Jacob Newman both won their singles matches as did our mixed doubles team of Greg Quon and Raushan Liu.  This was our best result so far this season.  Congratulations Crestwood Badminton!

The Varsity Track & Field team for braved the harsh weather Thursday at the Bill Crothers Invitational. Alexa Gibson won first in javelin and Zakayla Day-Burrell finished first in the 100m dash! Hayden John, Shane Latsky, Liam Wagner and Ethan Li also did a great job in their 4x100m relay. Congratulations to everyone who competed! 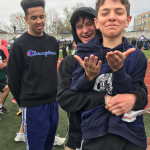 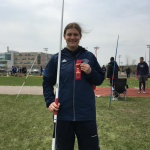 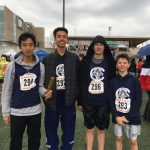 The U14 Boys Softball team continued their season Monday afternoon with a home game vs. Toronto French School.  Despite losing some of their top players to a hockey tournament, the remaining members of the team put forward a valiant effort, losing by a score of 13-8 in a game that was close until the very end.  Stars of the game included Aiden Nunes, with clutch hitting and big catches in the outfield, Patrick Shain, who hit three doubles to add to his season total of five, and Anthony Cristoforo, with 4 RBI and a spectacular catch at shortstop which set up a double play.

The U14 Boys Softball team continued their season Thursday with a game vs. St. Andrew’s College. The boys got off to a good start, and despite some notable base running errors, were nevertheless able to hold on for an exciting 10-6 win. Star performers for the game included Patrick Shain, who played excellent defense at first base and came within inches of clearing the fence for a grand slam, Sean Doherty, who had an excellent pitching performance, and Thomas Dennison, whose clutch RBI single with the bases loaded gave the team some necessary insurance going into the final frame. The boys will look to continue their winning ways as they take on UCC this coming Tuesday.  Great work boys!

The U14 Girls soccer team traveled to Toronto French school Monday afternoon in what was a very exciting and well fought match. Our girls matched the girls from TFS ball for ball in the first half, only giving up one goal on a turnover. The second half proved a little different as TFS had the upper hand on the balance of play, scoring two more goals in what resulted in a 3-0 loss for CPC. Still, all the girls showed fight and resolve, with honorable shout outs going to Abby Mintz, Tina Otchere, Sara Farahi Fard, and Chiara Codron. The girls next match in on Monday at Cherry Beach versus Moncrest.

A spirited performance from the Crestwood Lions against the Ridley Tigers on Wednesday afternoon was not enough to win the game. The match ended in a 1-1 draw, even though the Tigers had more shots compared to the Lions, both sides were pretty evenly matched during the first half.  The first half saw the ball being traded between the two midfields with the Tigers mounting slightly more pressure on the Lions defence but were unsuccessful in their numerous attempts thanks to a stellar performance by Alexa Gibson, the Lions top-notch goalie. However, with just seconds left in the first half, Ridley squeaked one in off a well placed cross and finish. Although the Tigers had greater possession of the ball, the Lions did not let the intensity, and aggression in their game dip for any moment the rest of the way. Our strong physical presence of Marta and Sophia frustrated the opposition. However, the Tigers defence had an answer each time the Lions would surmount an offense, thereby keeping the score 1-0. Until, injured player/team advisor Sarah Douey made a game altering comment on the sideline..”It’s time to release Alexa”. Sending our goalie into the outfield was the best decision, as she was able to be the spark plug of energy the Lions needed, she ran down the field and scored to tie the match and get a point for the Lions…for the second game in a row! Substitute Coach O’Connor praised her team’s effort, saying, “We worked hard despite having many team members absent for trips and injuries. The team showed adversity to play the entire game and battle back to get the job done.” She also wanted to give Georgia Gardner a shout out for stepping in to play, and being a great addition to the squad.  The Lions will now travel to Waterloo and take on the SJK Eagles and look to get back in the win column on Wednesday May 15 at 3 pm.