Skip to content
November 28 – Air Force Day –  was proclaimed in 1946 to mark the anniversary of the founding of the Royal Canadian Air Force (RCAF) in 1924.  At Crestwood we have been fortunate to meet so many men and women who have played a role in the RCAF, in conflicts from World War Two through to the present.
Mac Joyner enlisted at the age of 18, and went on to train at Manning Depot graduating from #5 AOS in Winnipeg. By the end of the Second World War, he had taken part in a total of 33 major operations, as a navigator bombardier in a Lancaster bomber.  You can meet him here – https://crestwood.on.ca/ohp/joyner-mac/.
Noel Funge served during the Cold War years, where he was in a photo reconnaissance unit, working with the RAF and mapping the colonies of the British Empire as they were transitioning during the period of decolonization, and he was on the front lines of the Cold War too, ready to strike if the USSR’s aggression was not held in check.  You can meet Noel here – https://crestwood.on.ca/ohp/funge-noel/.

LCol Brenda Tinsley serves in the present-day Canadian Forces.  She has served in the NORAD Operations Centre located at CFB North Bay and was an instructor at the Canadian Forces School of Aerospace Control operations. She also deployed to Kuwait as a part of Operation Inherent Resolve, where she worked both in planning and operation phases. She later returned to North Bay where she became the first female commanding officer of a squadron at CFB North Bay.  You can meet her here – https://crestwood.on.ca/ohp/tinsley-brenda/. 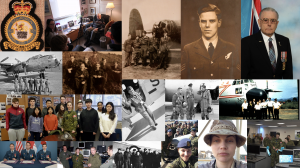