After defeating Crescent last Thursday, the U14 Boys Hockey team headed to UCC this past weekend for their annual invitational tournament. The boys got off to a great start on Friday defeating Loyola High School followed by Academie St Louis to advance to Group A on Saturday. Saturday started well with a nail biter win against Crescent, when CPC scored with 2:23 left. The boys followed up with a 5-2 win against LCC later that day to advance to the finals, with only 8 skaters for most of the game!

We faced Crescent again in the finals and despite a fantastic effort from the boys, we came up short. Congrats to the boys who played this weekend on a great start to the season. Special shout out to Sean Doherty who has 10 goals through 6 games, and Jake O’Brien who has scored 7 times through 6 games.

On Dec. 3rd, the Varsity Girl’s Hockey team travelled to De La Salle College to play in the Brother Arthur Memorial Tournament. The girls came out with high spirits and a lot of energy, they won the tournament opener against the defending champion and host De La Salle with a score of 2-1. After that the girls defeated St. Clements 6-0 to top Group A and advance to the semi-finals. They then defeated Holy Name of Mary Catholic School where they dominated the other team winning 6-0. The girls did not stop the momentum in the finals against Branksome Hall. Leading the charge was Finals MVP captain Peyton Van Volsen, the girls took the finals with a blowout score of 8-0.

Special shoutouts go to Karianne Engelbert for winning tournament MVP, Jenna Smellie for winning top points scorer with 10 points in the tournament,  Mya Lucifora for best goalie with only one goal against all tournament, and the rest of the girls for putting Crestwood on the map. Look out for their next away game against De La Salle College on Monday  Dec 9.

Dec. 3rd was a good night as our Sr. Prep girl’s basketball team took the floor against a well-coached King’s Christian Collegiate.  A few minutes into the game, our dominance was apparent.  With Aaliyah Edwards and Tasha Lattimore dominating the boards, and Shayeann Day-Wilson lighting up the from the outside, we saw the lead grow to over 30 points in the first half.  The final score was 77-62 with Aaliyah Edwards leading all scorers with 32 points.

The Junior Boys Division 1 basketball team is now 3-0 in CISAA action after a 59-38 victory over UCC. The Lions started off hot with a 19-2 first quarter lead and cruised to victory.  12 of 15 players scored and starters were able to sit the entire 2nd half as many others took advantage of increased playing time. Zack Graff scored 6 and dropped off a beautiful pass on an assist to Chadwell Knight-Seucharan in the 4th quarter. John Alpacar pitched in 7 points off the bench and Liam MacInnis scored 4 with several tough rebounds.

The Junior Lions have next week off from games before finishing up 2019 with games at St. Andrew’s College and the second session of the National Junior Circuit on December 20-22.

The senior girls volleyball team travelled out to St. John Kilmarnock on the afternoon of Dec. 4th to kick of their season. After shaking off a bit of rust in the first match vs. SJK, they came back to beat Rosseau Lake College in two straight sets.  Coaches were pleased with consistent serving by all, and some excellent plays. Shout out to Maya Berger for her killer spikes!

Wednesday afternoon, the U-14 D3 team played their first game of the season against Pickering College. The energy and excitement was palpable. The team got off to a good start taking an early lead, with  strong play from Kanmi Akodu, Ryan Michaels, Ashe Mclean, and the entire team. Pickering came back strong and tied the game with 1 minute left. Driving hard to the lane, Aidan Vo was fouled, and hitting a crucial free throw giving us a one point lead, Final score was 37-36. Great way to start the season boys.

This Wednesday was a good day, as the CPC U14 D1 boys basketball team won another game in thrilling fashion against a formidable opponent.  Your cpc lions started off with a bang, connecting on three of their first four 3 point shots. The boys jumped out to 15- 6 lead at the end of the first quarter and continued to extend that lead into half.  In spite of the strong led created by the lions going into the half the Sterling hall boys did not give up, and mounted their own furious run after the break.  In the late 4th quarter the cpc lions had 2 point lead with 51 seconds left to go and executed on great backdoor play to Marcus Green for 2 of his game high 31 points. The final score was 65-61 with great contributions from Jay Codron with 13 points, Aydin Nunes 6, Bradley Norman’s 6,  Geoffrey Lungen 5 points and at great defensive effort from the rest of the boys. Great team win! 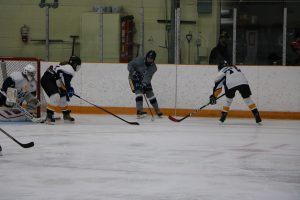 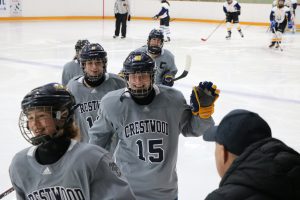