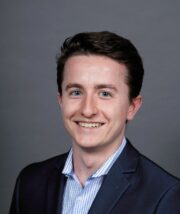 After I graduated from Crestwood, I was convinced that I wanted to study Computer Science at Queens University. Three years into my program, I realized that I wasn’t enjoying it as much as I thought I would and I made the hard decision to drop out. I started working as a brand ambassador for a marketing company where I handed out samples in grocery stores all around Ontario. I worked there for nine months until I applied for a Project Management Analyst position at Mackenzie Investments. Having no experience in the financial services industry, I was really only asking for a chance to prove myself. After six interviews, I was offered the position and I started working with Mackenzie in September of 2018. I have been with Mackenzie for two and a half years now and have since been promoted to Senior Project Analyst. I’m loving every moment of it and I’m so grateful that I was given the chance that I was hoping for.

Having played hockey and rugby at Crestwood, I was happy that I could continue to play both throughout University. Although covid has restricted me from playing hockey and age has restricted me from playing rugby, I still enjoy watching both on TV. Looking back, I never really knew what I wanted to do until I found something that made me happy. Forrest Gump once said “Life is like a box of chocolates”; I just needed to try a few to figure out which one I really liked.