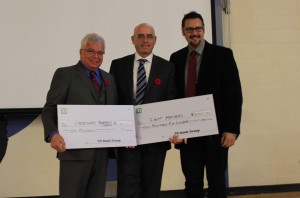 Crestwood Preparatory College held a Remembrance Day Assembly to honour those that have paved the way for us, as well as reflect upon the sacrifices that have been made by Men and Women in order to preserve our freedoms. The assembly was attended by Veterans of the Second World War, including George MacDonell, who spoke to students about the role that Men and Women played in the war effort. During the Assembly, Scott Masters was recognized by TD Bank as a recipient of The Governor General’s History Award for Teaching Excellence. Many thanks to all those who organized and participated in today’s events.