Skip to content
This past Wednesday, January 27, was Holocaust Remembrance Day.  On January 27, 1945, Auschwitz-Birkenau, the largest Nazi concentration and death camp, was liberated by the Soviet Red Army, and in subsequent months other camps were liberated by the Allies.  International Holocaust Remembrance Day commemorates the end of the genocide that resulted in the deaths of 6 million Jews and 5 million others, by the Nazi regime and its collaborators.  At Crestwood we have made it a priority for our students to hear the stories of these survivors, and today we want to remember the Crestwood grandparents who have spoken to our students about their families, their suffering and their liberation and survival.  Chava Sloma, Les Mitelman, and Bill Glied all survived the Holocaust, and they all came to Canada, where they built their lives.  Please take some time to listen to their stories:
Bill Glied – https://crestwood.on.ca/ohp/bill-glied/
Chava Sloma – https://crestwood.on.ca/ohp/sloma-chava/
Les Mitelman – https://crestwood.on.ca/ohp/mitelman-les/ 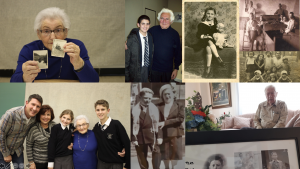