The Grade 12 Classical Civilizations class was given an ISP that asked students to research and build a Roman style weapon used during the Roman Empire. Students could choose any style as long as it could launch a projectile or in this case a golf ball. After in-depth research, and a written description of the different weapons used by the Romans, students had 2 weeks to build what they thought was the best choice. After documenting and testing their building process, they came together as a class and were able to test their products. Much fun and laughter was had as students showed off their Roman legion abilities. At the end of our mini showcase and competition our tired warriors were rewarded with donuts and bragging rights. Next we’ll debate why their choice of Roman weapon was the indeed the best of the best. 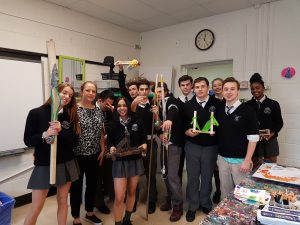