During the second week of March Break, when many Crestwood students were sunning themselves on tropical beaches, Coach Hawkins and the members of the Varsity Boys Curling team travelled north to compete in the OFSAA provincial curling championships. This year’s tournament was held in Fort Frances, Ontario- located approximately 1,700 KM northwest of Toronto, close to the Ontario-Manitoba border.

Adam Golden, Spencer Arshinoff, Malcolm Leask, Joseph Eisentraut and Jacob Reinish represented Crestwood against the top high school curling teams in the province. Facing stiffer competition than they had ever seen before, Crestwood’s boys did not wilt under the pressure and played competitively in all of their round-robin matches. The highlight of the tournament came for the boys in a late-night draw against Etobicoke’s Bishop Allen Academy. Shortly after midnight Central Standard Time, the boys capped off a dominating 11-4 victory. This makes the Crestwood Varsity Boys one of the small handful of CISAA teams to have ever won a game at OFSAA curling.

When not busy with curling, the boys had the opportunity to explore the town of Fort Frances. The boys joined the locals for Wing Night at La Place de Rendezvous, climbed the town’s fire lookout tower, and learned about the historical role of the logging industry in the town. The boys also had a unique opportunity to experience the natural beauty of the region while staying at their accommodations in a cabin on Rainy Lake.

While the boys did not advance past the round robin stage of the tournament, in terms of having fun and making memories, they were gold medalists. Coach Hawkins and the boys would like to thank Coach Scott Walker for his assistance with the curling program this year, Chris Jull for his work as CISAA Curling convener, Mr. Pagano and the administration for their support, and Mrs. Carol Lyons for hosting the boys during the tournament. Coach Hawkins would also like to give a special thank you to the team members, all of whom will be graduating this year. 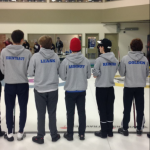 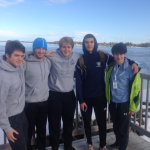 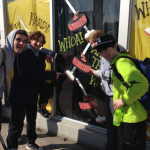 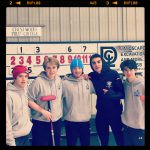 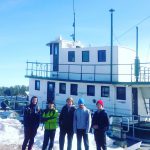 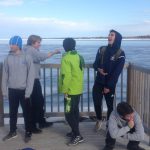