On January 18th 2018, Edward Li travelled to Quebec city to compete in the 2018 Canada Cup East. In this tournament he fenced in the Men’s Foil Junior Teams, which is an event where a maximum of four people on a team compete with other teams and try to reach for the top. There were a total of 15 teams competing in this event, and in the end Edward Li lead his team to victory and won the gold medal for his fencing team! 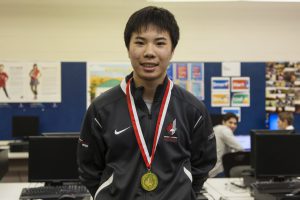