Our U14 Swim Team achieved their absolute personal best time during last Thursday’s CISAA championship.  James Gillingham won 4 points for the school with his 50m Freestyle, 3 points by  Amy Cai with her 50m Breaststroke, and Jordan Nikolov and Zachary Black both won 1 point each for their 50m Breaststroke as well.  The highlight of the day was when our relay team of Benjamin Davidson, Jordan Nikolov, Amy Cai, and our anchor James Gillingham placed first in their heat.  Coaches Hecock, Koaich, Wappel, and R.Lee would like to congratulate all our swimmers for yet another impressive season.  We may be a small team, but we are a great one.  Great job, swimmers! 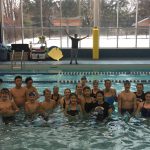 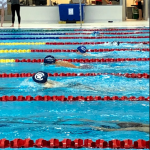 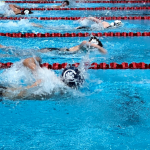 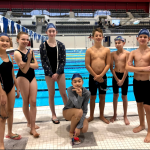 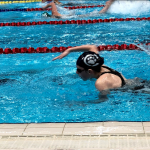 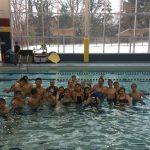 The Junior Boys’ Basketball team traveled to Crescent last Wednesday afternoon for their final regular season CISAA game. After a slow start, the Lions trailed 22-23 at halftime. However, the Lions clamped down on defense in the second half and ran off to a 53-37 victory.  Matthew Nelsons led the way with 21 points, while K’Shawn Latty added 16. Caiden Oshinowo hit a couple of big 3s in the second half to pitch in 6 points. Big shout out to the entire team on their defensive effort in the second half, as they held Crescent to only 14 points. With the win, the Crestwood Juniors claim the regular season CISAA title with a 12-0 record. Playoffs start on Wednesday as the Lions will host the 4-seed.

Last Wednesday our Senior Boys’ DII Basketball team played a difficult game against Country Day School.  The boys kept their composure despite never having the lead through out the game. With this loss of 77 to 49 to Country Day School, our Lions fall from 2nd place to 4th place.  Special mention goes to Derek Boecker, Cole Morrison and David McCall for their team effort from the tip off to the final whistle of the game.

A big shoutout goes to the five all-star members of the U14 Girls Volleyball team who played the shorthanded game against Trafalgar this past Wednesday: Ella Lee-O’Rourke, Tinamarie Otchere, Saleah Joseph, Isabelle Rigny, and Chiara Codron. The girls came together and demonstrated what they have been practicing; winning points with amazing serves and powerful three hits. The Lions won the matches: 25- 16, 25-20, and 25-10. Way to go, ladies! Thanks for the great season. 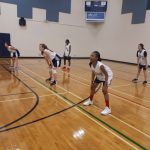 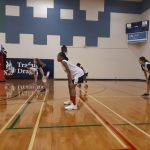 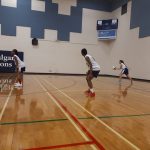 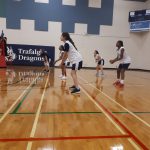 Crestwood’s U14 and Varsity Boys’ teams were in competition last Tuesday night at the Toronto Cricket Club, in the first stage of the CISAA curling playoffs. The U14 squad was in a sudden death match-up against the team from TMS, with the winner advancing to the semi-finals next Friday. Skip William MacInnis called a fantastic game, and spot on shots from Tony, Cole and Arjun helped Crestwood jump to an early 5-1 lead. The TMS squad tried to make it interesting in the final ends, but the Crestwood U14s held them back and finished the game 6-3.

The Varsity Boys squad had a chance to advance directly to the finals in their match against the 1st place squad from St. Andrews. Despite curling shorthanded, and falling behind early, Adam, Jacob and Gaby kept themselves in the game and mounted a comeback in the second half. Unfortunately, they ran out of ends before the comeback could be completed. Thankfully, the Varsity Team will have another chance this week, as their high rank in the overall standings gives them a berth in this week’s semi-finals.

With only 1 week left in league play this winter athletic season, CPC has had some very impressive results!  We would like to congratulate a few teams that have finished at the top of their leagues;

Varsity Boys hockey – 1st place with only 1 loss all season

Both our Jr and Sr Girls are moving on to playoffs as well.

Finally, we would like to wish the best of luck to a few students that will be representing CPC at OFSAA in March;