Congratulations to the Senior Boys’ Volleyball team on their win Wednesday against Lakefield College.  Great serving by Luis Pacheco and Matthew Nelsons helped push us past a tenacious Lakefield squad.  Good work gentlemen!

The Senior Boys’ Volleyball team opened up their season Monday with a hard fought game against Greenwood.  Exceptional hitting from Julio and Immanuel and superb serving from Trevon allowed us to stay in the competition pushing the sets to 5. Although we lost in the 5th set the boys played a great game of volleyball and will be contenders moving forward.  Keep hitting boys! 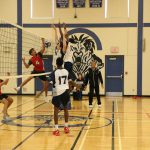 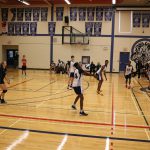 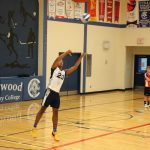 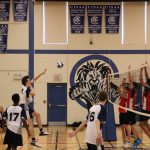 The U14 Boys’ Volleyball team had a great start to their season Wednesday with two impressive matches. The boys dominated the court against their first opponents TMS, winning the games 25-9 and 25-18.  Following the first match, CPC had an exciting and close three-set match against Bayview Glen.  After CPC won the first game 25-21, Bayview came back taking the next one 25-22. A nail biting ending had Bayview winning with a close score of 26-24.  Shoutouts go to Aiden Nunes for his consistent awesome serves, Cole Luepann for his hands at the net, and Anthony Cristoforo for the energy he brought to the court. Way to go, guys! Looking forward to what we can do!

Monday, the Junior Boys’ Volleyball team travelled to Greenwood College for their first game of the season. The three sets were competitive and exciting, and each member of the team brought some great plays to the game. Special mentions go out to Samir Bagher Nejad for awesome serves and some hard hits, Hayden John for his great movement on the court and hard spikes, and Elijah Fisher for some fantastic blocks.  The team has great potential, and will continue to improve with practice.

The Junior Boys’ Volleyball Team won their first Home Game Wednesday against Lakefield. The game was won 3 sets to 1, with great plays by all athletes. Josh Carter dominated at the net with awesome hits and blocks, while Robert Dumoulin-White made sure our hitters got the ball with some great sets. Kian Torabi Ardakani’s infamous serves were hard to return, and Hayden John was always on his toes, digging, smashing, or blocking the ball. Great work boys! 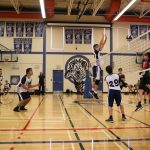 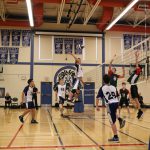 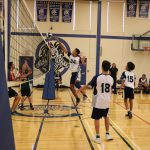 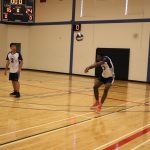 The U14 Boys’ Soccer team kicked off their season with a convincing 12-0 win at Sterling Hall.  The boys led 6-0 at half time thanks to a hattrick from Adam Pearlman and goals from Patrick Shain and captain Jase Todd.   The team didn’t let up after the half and further goals from Patrick and Jase as well as Kyle Little, Kanmi Akodu and Zach Black completed a wonderful victory.  The whole team put in a masterful performance! 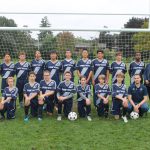 The U14 Boys’ Soccer team continued their season Tuesday after school at home against a strong De La Salle team.
The team was on the backfoot early after De La Salle scored a penalty inside the first 5 minutes. Despite some good passing and effort, Crestwood was down 4-0 at half time. After the break, Crestwood showed great fighting spirit and teamwork to pull a goal back when Adam Pearlman scored halfway through the half. Despite a great second where Crestwood was the better team, the boys were unable to mount a comeback, eventually losing 5-1.
All the boys played well again, showing great fight and team work when faced with adversity.
The Junior Boys’ Soccer team started their season off strong with a convincing 4-2 victory against Lakefield College. It was a complete team effort that was highlighted by incredible passing and teamwork. Special mention goes to Adam Pearlman, Alex Korda, Matthew Nelson and Aidan Lieberman for their sensational goals, Jesse Codron and Mateo Rocha for their great play in the midfield and the defence for shutting down Lakefield. Great job boys!

The Senior Boys’ soccer team traveled to Lakefield Wednesday afternoon to play their first game against Lakefield College.  The team started out strong as it took the lead on a well-earned goal by Michael Di Battista, thanks to some good hustle by Ege Kuseybat and Jonas Weissland.  The lead was short lived however, as Lakefield took full advantage of our depleted bench and tired legs, with two goals before the game ended.  Despite generating some chances in the second, the game would end 4-1 in favour of Lakefield.  Kudos go out to the entire team for their heart and effort.

A huge congrats goes out to the U14 Cross Country team, as they completed their first meet at Centennial Park. Special kudos goes out to Bradley Norman, for a 4th place finish in his division. Well done everyone!! 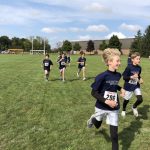 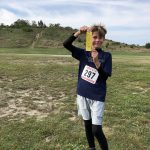 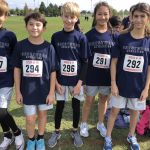 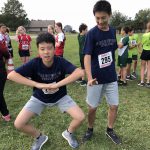 The U14 Girls’ Basketball team opened their season last night at home against the Country Day School.  The team went out strong and never looked back.  Our lady lions scored 61 points and played stellar defense holding Country Day to a mere 16 points.  Everyone contributed to the win;  Taija Sta Marie and Chiara Codron led the way with 14 points each, followed closely by Jordan Kosoy with 13 points and Tinamarie Otchere with 12 points.  Jolie Drummond and Taylor Howell added additional points putting everyone on the board!  Congratulations on a great first win!!!

Wednesday night the Junior Girls’ Basketball team opened their season on the road at Ridley College.  The team went out strong and never looked back.  Our Lady Lions scored a whopping 50 points and played convincing defense only allowing Ridley College to 22 points.  Everyone contributed to the win;  Latasha Lattimore led the way with 18 points, Shayeann Day-Wilson contributed with 14 points, and newcomer Ella Okubasu had 6 points of her own.  Great play by all and congratulations on a great first win of the season!!!

Wednesday night our Senior Lady Lions’ Basketball team travelled to Ridley College where they showed their dominance.  Our Lions took an early lead and never looked back.  The final score was 60-22.