The Junior Boys’ Rugby team had an exceptional day of rugby Wednesday at Sunnybrook Park. The day included tough matches against RSGC, Greenwood and HSC. The boys were heavily outnumbered by big physical teams, but were able to battle with every single game, nearly clinching huge victories in each game. A huge shoutout to every single player on an awesome season and an incredible amount of progress along the way. We have some tough rugby lions!  Jacob Hanning had some fantastic runs, alongside Callum Braund who kept touching the ball down in the try zone. Another kudos to Jonas Weissland and Aidan Kay for their phenomenal defensive tackling and offensive prowess.  Very proud of the boys, good luck in summer rugby! 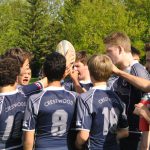 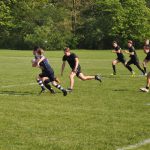 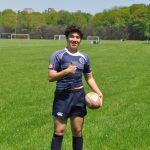 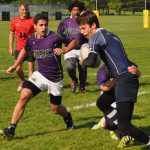 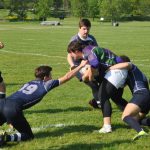 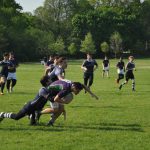 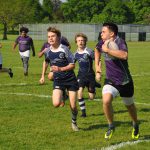 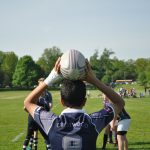 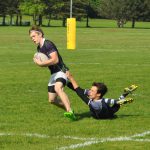 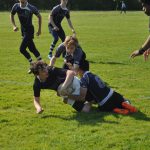 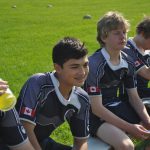 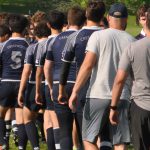 Congratulations to the U14 Girls Soccer team on their win Wednesday night against Trinity College. The girls had a great game, playing 1 player short during the second half.  A special mention to Kaila Lewin for her amazing saves in net, Taylor Howell for her awesome defense and Jordan Nikolov with the game winning goal in overtime.

A big congratulations to the Varsity Girls’ Soccer team for their win Wednesday against Holy Trinity School.  Julia Lee opened up the scoring early while Sam Mintz had to take up her position as a temporary goalie until our star goalie Alexa Gibson returned from track.  Crestwood played a great game and now advances to the final tournament on Saturday in Hamilton.  Congratulations and good luck on Saturday.  Please be at school on Saturday 7:00 am to travel to Hamilton.

On Wednesday the Varsity Track and Field team participated in the CISAA championship meet.  Congratulations to Zakayla Day-Burrell for winning first in midget 100m dash and to Alexa Gibson for placing 2nd for senior girls javelin.  Awesome job! 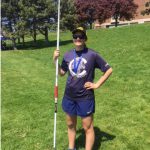 The Crestwood Ultimate Frisbee team’s season has officially come to a close. Last Monday, CPC welcomed Pickering College for an exciting match on our home turf followed by our travels to Lakefield College School for our final game of the season on Wednesday. Despite losing both games, our spirits and energy were high. Honourable mentions go out to Samara Black and Kayla Drummond for some impressive catches, Imani Mighty for some killer saves and excellent blocking, Anthony Radford-Grant for some fantastic pivoting action, and Faith Joseph for keeping the energy high while calling some great stacks. The team as a whole put on an impressive effort for our final time playing together this year. We’re sad to see the season finish, but Ms. Belanger, Ms. Doble, and Ms. Postma had a great season with you!!