Monday was an exciting day for the U14 Rugby Team.  Our U14 boys scored a total of 18 trys, during their 4 matches. Hosted by Sterling Hall, our boys played against Sterling Hall, both Appleby squads and Greenwood College.  In the first match, our U14 Rugby Team dominated Appleby College’s second squad with a 5 – 0 victory.   The second match faced our boys against Greenwood College which left us 3 trys short of a win with a score of 2 – 5.  The third match against Appleby College’s first squad ended in a tie of 1 – 1.  The final match against Sterling Hall left our boys with a dominating 10 – 0 victory.  A special shout out to: Adam Pearlman with 6 Trys , Philippe Stroganov with 3 trys, Jase Todd with 2 Trys, Ethan Li with 1 Try, Joshua Mayberry with 1 Try, Liam Wagner with 1 Try, Nathan Galansky with 1 Try, Noah Halili with 1 Try.

The Junior Boys’ Rugby team travelled to Rosseau Lake Wednesday to play Greenwood College and Lakefield College. The first game against the number one rivals from Greenwood, Joans Weissland scored an early try to go ahead 1-0 in the first half. After some silly mistakes and turnovers, the boys dropped the match 3-1 in the end.  The gents bounced back against Lakefield and had an excellent game. Congrats to Amir Rafati for a smart play off of a penalty and scoring his first try ever! Kudos go to both Callum Braund and Jacob Hanning for intelligent heads-up play at scrum-half.  The boys qualified for next week’s championships at Sunnybrook. Best of luck to them!

Tuesday, the U14 Track and Field team ran, jumped and threw at the York University meet.  Congratulations to Ethan, Josh, Steven, Ryder, William Ford and William MacInnis for proudly representing CPC despite the rainy weather. 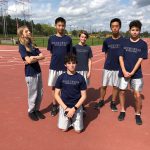 The U14 girls soccer team had their second game Monday afternoon at Appleby College. Unfortunately, Appleby scored a couple unlucky goals right off the bat in the first half. This early lead and Appleby’s various experienced players who were hard to stop, resulting in a high goal scoring game for Appleby. Yet, the Crestwood girls started to come together as a team and make some plays in order to tie Appleby’s second half goal count. Shoutouts go to Jordan Nikolov for scoring two goals, Amy Cai for scoring the third, and Isabelle Rigny for her consistent energy and determination.