After a two week hiatus, the Varsity Hockey team played their last road game of the regular season when they took on first place CDS.  The team did not disappoint, jumping out to a quick 3-0 lead with some great saves by Alexa Gibson in net and a natural hat trick by Christian Campanelli.  CDS tried to claw their way back, but CPC was too powerful for them on this afternoon, defeating them 6-3.  Great play by all especially for Alexa Gibson who made her season debut with the team and to Christian Campanelli and Aaron Little for both scoring hat tricks and having multiple point games.

In their last home game of the regular season, the Varsity Hockey took on a motivated RSGC team in what was to be a tight-knit battle on the ice.   After a scoreless first period, CPC was able to jump out to a quick 1-0 lead but then some bad bounces and a short-handed goal, RSGC was able to come back and take the lead 2-1 going into the third period.  Starting the third with a two-man advantage, CPC was able to capitalize and jump out to a 4-2 lead but was short lived as RSGC was able to come a quick one of their own, making the game 4-3.  With 45 secs left in the game, RSGC, unfortunately, was able to tie the game, ending in a 4-4 draw.  Mr. Birrell and Mr. Tanev want to commend everyone for their efforts in Thursday’s game for playing so well with such a depleted roster.  Kudos go out to Alexa Gibson for playing a great game in net and to Peter Keane and Michael Di Battista for having multiple point games.  The team now awaits their opponent for next week’s playoff game on Wednesday.

Last Thursday, the U14 Hockey team travelled to UCC. Trailing 5-3 entering the third period, the team rallied for a furious comeback to score 3 goals in the third period and capture their first win in CISAA U14 Division 1. Congratulations to all players on a well earned win and continuing to work throughout the season. Our final home game of the season is tomorrow afternoon against Crescent. Come cheer us on!

Tuesday afternoon, the U-14 curling team, skipped by Ally Sone, played their 3-4 Page Playoff game against Bayview Glen.  Led by excellent draw weight by Amy McCulloch, Crestwood built up a 5-0 lead after four ends.  Bayview Glen struck for three points in the fifth to narrow the gap, but Crestwood ran Bayview Glen out of stones in the final end to win 5-3.  Crestwood now qualifies for the CISAA Final Four playoffs on Friday, March 1st.

Wednesday the swim team had their Championship Meet, and they did amazingly!  Firstly, we’d like to congratulate the four swimmers who qualified for OFSAA—Megan Pearlman, Matthew Laslop, Will Magan, and Jack Magan. They’ll be representing CPC in two weeks, as they compete against the fastest swimmers in Ontario!  Swimmers placing in the top-6 include Megan Pearlman, Sarah Douey, Matthew Laslop, Will Magan, and Marina Nevison, with Megan taking gold in all three of her events.  Many other swimmers swam personal bests, and ended their season on a high note. We’d like to thank our graduating swimmers for an excellent season, and in many cases, excellent years of swimming; Kaitlyn Balter, Sarah Douey, Sam Douey, Alex Fallows, Will Magan, and Marina Nevison.  Congratulations to every competitor—your coaches are very proud!

On Tuesday, the Senior Girls’ Volleyball team played their final two games of the regular season with a chance to finish in second place and a bye to the semi-finals.  The ladies did not disappoint as they won both games against Bayview Glen and Hawthorne.  Although, we did not play our best game, our perseverance and talent was enough to overcome some of our miscues.  Our next challenge will happen on March 2nd as we battle for the championship.

Tuesday, the Junior Girls’ Volleyball team travelled to SJK for their second last game of the regular season. SJK came out swinging, to take the first set but after a little regrouping the Lady Lions came back to show what they were made of. We saw fierce determination to take our game to the next level with solid serving from Sylvia Zhang, amazing blocks and hits from Ella Okubasu, tremendous movement on the court to keep the ball in play from Saleah Joseph helping us to win the second set 27 – 25. Honorable mention also goes out to Christine Kong, Grace Peng, Isabelle Rigny, Lexy Peerenboom and Parmis Shameli for their resolve and the best performance this season. SJK came back to take the next two games but Ms. Letham and Ms. Belanger couldn’t be prouder of the solid playing from our Lions. 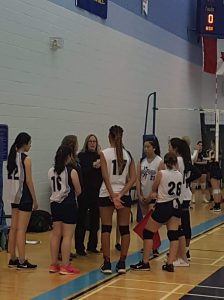 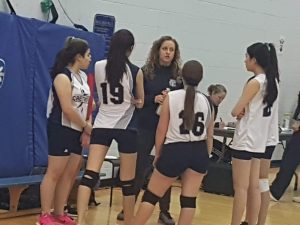 The Crestwood Junior Boys D1 Basketball team defeated Crescent on the road 60-29 on Wednesday afternoon. The win secured a #1 seed and home-court advantage in the CISAA playoffs for the second straight year. The Junior Lions jumped on Crescent early and never looked back in-route to a 31 point victory!  Elijah Fisher led the way with 16 points, while Christian Gheoculet added 10. Matai Baptiste and Immanuel Oludele were terrors on the offensive glass, picking up double-digit offensive rebounds between the two of them. While starters sat out the 4th quarter, our bench players were fantastic defensively holding Crescent to only 4 points in the final quarter, while scoring 11 points themselves. The entire team showed great composure throughout the entire game.  The Juniors will host St. Andrew’s College next Wednesday in the semi-finals of the CISAA playoffs. The game time has not yet been announced.

The Crestwood U14 Boys D1 Basketball team defeated Bayview Glen on the road 68-47 on Thursday afternoon. The win secured a #1 seed and home-court advantage in the CISAA playoffs. The U14 Lions jumped on Gryphons early, starting the game off with a score of 15-0 and never looking back, en-route to a 21 point victory!  The Lions were pushed by a well balanced scoring onslaught, which included Marcus Green’s 16 points,  Mikkel Tyne’s 13, Pharaoh Wendt’s 11, Jamey Luepann’s 9 and Jack Wu added 8 points and solid defence throughout the game.  U14 boys have earned themselves a first round bye and automatic semi final appearance after a perfect regular season record. The semi final game will take place next saturday in our home gym at 9:30 am and finals at 12:00. Make sure to come out and support our young men as they try to accomplish something special!