Skip to content
The Crestwood Oral History Project is continuing its Sunday Series of Interviews with World War Two veterans.  Last Sunday we visited with American Navy veteran Wallace Johnson at his home in California.  Wallace joined the navy when he was only 16, and after the war he became a test pilot for the Apollo space program.  Wallace was such an engaging interview that we have arranged a part 2 in a few weeks!  This coming weekend we are visiting Canadian veteran George Haley, who lives in Edmonton.  George was one of the few Canadian veterans who was deployed in southeast Asia in the war against Japan.  As these interviews take place on weekends, students can earn community service hours while they listen to great storytellers talk about important history.  Please email Mr. Masters if interested. 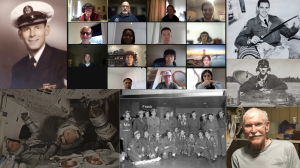