Skip to content
Janet Watt was born December 16, 1920, so today we wish her a Happy 101st Birthday! Janet was one of so many Canadian women who entered the armed forces during the Second World War. Janet chose to go in the navy, and she became one of the WRENs. As Janet entered the services at the end of the war, her time in the military was limited, though her experiences are very illustrative of the period. Having grown up out west, Janet’s war years were spent in the Toronto area; she remembers parading on Harbord, as she was being trained as a dental assistant, something very much needed for Canadian troops abroad and returning home. You can meet Janet here – https://crestwood.on.ca/ohp/watt-janet/. 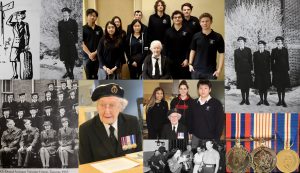