Skip to content
Human Rights Day is celebrated annually around the world on 10 December every year.  The date was chosen to honor the United Nations General Assembly’s adoption and proclamation, on 10 December 1948, of the Universal Declaration of Human Rights (UDHR), the first global statement of human rights and one of the first major achievements of the new United Nations. The Crestwood Oral History Project has hosted many speakers who addressed this fundamental topic, including Jean-Gabriel Castel.  Born in Nice, France in 1928, he spent part of his youth as a amember of the French Resistance in World War 2, challenging Germany’s wartime occupation of his homeland. He and his family survived all the difficult experiences of the war years – the hunger, the deportations, the tension that filled each day…When the war concluded, he went on to become one of the first scholars of the Fulbright program and an intern at the United Nations.  He also taught law at McGill University and the Osgoode School of Law, with a focus on international law.  You can meet him here – https://crestwood.on.ca/ohp/castel-jean-gabriel/. 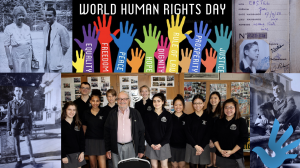