On Wednesday, the Senior Girls’ Volleyball team travelled to Albert College to play against both Albert College and Bayview Glen.  Although the girls showed some rust in their play after the winter break, they were still good enough to win both games 2-0.  Three games into the season, the girls remain undefeated.  We will try to continue the strong start to the season next Wednesday in our first home games.

Wednesday night the Junior Girls’ Volleyball team had their first game after the break.  Our lady lions faced off with the formidable St. John’s Kilmonark, forcing us to shake off the cobwebs and get to work. Although SJK brought the power, our girls faced that challenge and held their own, making the opposing team work for every point. Regardless of our eventual defeat we saw of the best playing we’ve had all season. Special mention goes to Sylvia Zhang for digging up the ball, Saleah Joseph for her awesome spikes, and Ella Okubasu for her super star blocking.  Come out for our next home game Monday January 14th Crestwood and cheer our Lions on!!! 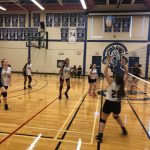 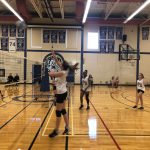 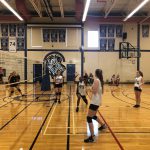 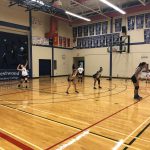 It was the season opener for our Open Curling Team, with Lyndsay McCullough as a new Skip. Toronto Montessori School came out swinging with a 3-Ender which was answered with a Crestwood 3-Ender to keep us within 1 point at the halfway mark. TMS rallied and pulled away from us in the second half, but it was a solid start for our team after 3 weeks off the ice. We look forward to the rematch!

The Junior Boys’ D1 CISAA basketball team moved to 4-0 in CISAA play with a 59-35 win over Trinity College School.  Although the boys struggled shooting the ball after the winter break, they were able to find a way to get the win.  Immanuel Oludele and Elijah Fisher led the way with 13 and 12 points respectively . Elias Papaconstantinos pitched in 10 and Kailon Nicholls added 8.  Zack Graff showed his defensive presence by taking two different charges in transition!  The Junior Lions will be back in action next Tuesday when they travel to Crescent for a 3pm game.

Thursday evening the Lady Lions travelled to downtown Toronto to take on a very energetic Central Tech team.  The Lions got off to a slow start, but once the intensity picked up, there was no looking back.  Latasha Lattimore led all scorers with 29 points, followed by Aaliyah Edwards with 27 and Shayeann  Day-Wilson with 18.  Crestwood currently stands at the top of the OSBA with an undefeated record of 11-0.  The Lions take the floor next Tuesday at home versus Durham Prep.  Tip-off is at 5 pm; come out and show your support!